Your Baby’s Brain Development: 6 to 12 Months

Your Baby’s Brain Development: 6 to 12 Months

Three things a baby learns from dropping a spoon—so be patient!

Your baby is entering an exciting period, one in which her brain is developing so rapidly you might even notice changes in her from day to day. Her brain may not be adding new cells at the same rate it did after birth, but it’s continuing to add new axons and dendrites, the branches that allow signals to pass from neuron to neuron and enable communication between different regions of the brain. As the neurons go through a process called myelination, these signals travel faster and faster, laying the groundwork for increasingly complex cognition and motor function.

What exactly happens in myelination? It’s a process that coats the nerve endings with a fatty substance, which speeds up the transmission of nerve impulses, thus allowing for more complex cognitive function. But it occurs in different regions of the brain at different times. It begins while your baby is still in the womb, with the coating of primary sensory and motor cells located in the brain stem. It then progresses gradually to other regions of the brain, where the cells responsible for the most rudimentary functions are the first to undergo myelination, and those responsible for higher-order activity are last. Most myelination is completed during the first two years of life, but in regions associated with the most complex, abstract thought, it continues through childhood, and possibly into adulthood. For now, here are some of the developments you may see—and what’s fueling them.

If your baby is beginning to try your patience by doing the same things over and over—like dropping a toy or her spoon when you’re trying to feed her—congratulations! That’s exactly what she should be doing at this stage. Babies gain an understanding of concepts like cause and effect and object permanence through experimentation and repetition. When her spoon falls, she learns about gravity; when it hits the floor with a clink, she learns about sound; and when you reach to pick it up, she learns that she can count on you to meet her needs. Each time she repeats the action, it stimulates neural circuits in her brain, which strengthen with frequent use. Practicing the same activities time and again not only reinforces the lesson but it lays the groundwork for even more sophisticated learning and understanding.

Your baby couldn’t master the gross motor milestones of sitting up, crawling, and pulling herself up to stand without the development of her cerebellum, the part of the brain that governs coordination and balance. The fine motor coordination required to grasp a rattle, bat at a mobile with her hand, and pull and push—which comes about before her first birthday—is also made possible by the increasing number of neural connections in her cerebellum. These motor pathways become further refined and strengthened as she repeats and practices each action.

Motor coordination is even more polished by what’s known as right-left brain differentiation, which continues to strengthen during this period. The right brain has primary control over spatial processing, which enables your child to make sense of her visual world, while language acquisition is based primarily in the left brain.

In the first year of life, babies perceive many more sounds than adults do, and their challenge is to learn to distinguish between them. As they begin to focus on isolating certain speech sounds and filtering out others, they start to pick up language. This editing allows the brain to weed out some of the neural pathways that aren’t being used. The more verbal you are with your baby, the more chances she has to learn about communication. Also, keep in mind that babies are likely to develop language skills more quickly when their brains are allowed to focus more specifically and when there isn’t a lot of background noise in their environments (such as the TV) to interfere with their hearing and listening.

Hearing, language skills, and the ability to interpret facial expressions—key to successful social interaction—arise in the temporal lobes of the brain. As the neural connections in this part of the brain grow more complex in your 6- to 12-month-old, your baby becomes more and more interested in and engaged with those around her.

During this period, too, babies begin to develop greater attachment to their primary caregivers. This change is due in part to a growth spurt in the frontal lobes (which are responsible for memory and play a role in learning and language). They now have a firmer recognition of Mom, Dad, and other caregivers. On the other side, they also know when someone isn’t familiar—this distinction can trigger a stranger anxiety phase. 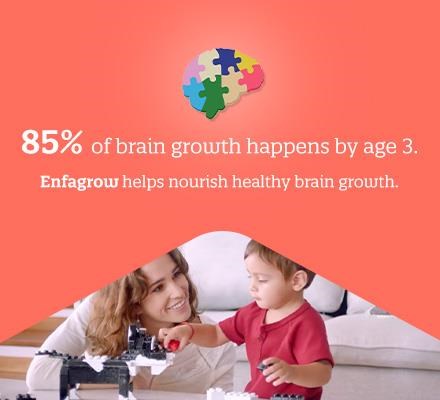